How good is rainy season in Thailand, barley anyone around and when it does rain its literally like a 20 minute downpour which dries up half an hour later. In Thailand we had decided to go to Phuket, Patong, pretty touristy but it was one of our first trips together and we really didn’t know what to do. The first thing I did when I got to Thailand was send this picture to my mum an tell her my pre drinks for the night haha.

We booked a hotel which was a 2 minute walk from the beach, as we didn’t have a lot of money our room was £10 including breakfast, we had no idea what it was going to be like but that we would have to deal with it. On arrival we were pleasantly surprised, the hotel was so cute and clean, the staff were amazing and very helpful. We did have a ground floor room but unfortunately the smell of the drains was too much and they upgraded us to the third floor which also was the pool level, For £10 a night we really hit the jackpot. 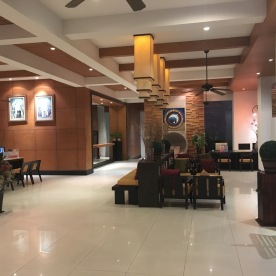 After having a little chill in our room we decided to explore. The walk from our hotel to the centre was about 10-15 minutes, mind you it’s about 33 degrees and humid as anything, anyway you can take a tuk-tuk but they charge a ridiculous amount because you’re a tourist, so don’t do that option, waste of money. Its a pretty random place to be quite honest, so much going on all the time, every corner you turn, its endless. Lots of malls and stalls to look through, we didn’t really go inside the malls as it was all really expensive stuff and you’re there for the Thailand experience right? Why go inside a mall to shop when theres thousands of stalls just waiting for you to barter haha! 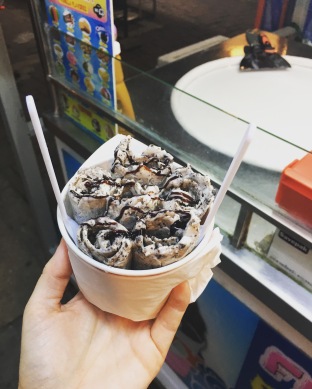 Whilst we were here we got a boat tour out to the Phi Phi islands, I think we went at about 11am, which was peak time for everyone to go (obviously we didn’t know this and couldn’t afford a private tour). The island was absolutely rammed, I did not think it was going to be as busy as it was, everyone on Instagram always portrays this awesome island with no-one on it but you literally have to go at like 5-6am for that. There wasn’t an inch of beach that didn’t have anyone on it. We had a couple of hours here before we head to the other islands and did some snorkelling. It was such a beautiful experience, I don’t regret it but next time we go back we will definitely be booking a private early tour to have the island to ourselves. 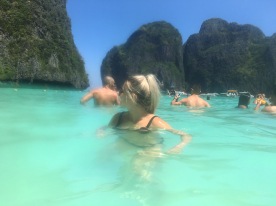 When walking around Patong we had no idea what to do about getting to the Big Buddha and other temples we wanted to visit. After some online research you could pay about £60 for the day and have a personal driver. Obviously at the time this was just too much money for us so we went to one of the stalls and bartered our way to £15 each for a group tour to the big Buddha.

This was such a beautiful trip, the scenery is so spectacular. What we didn’t realise was in this trip we would be going to see a baby elephant. I highly disagree with the capture of elephants and how they are treated in Thailand, and to be taken here was a nightmare. The other tourists were getting out taking photos which made me feel so sick, we sat inside the bus and didn’t even look at the poor thing. I just couldn’t. Overall it was a really nice day, the temple and the bee hive place were probably the highlights of mine.

Bangla walking road is the most famous part of Patong, countless clubs, bars, restaurants, shows, everything you could ever think of. Thinking about seeing some ladyboys perform? How about a ping pong show which gets shoved in your face every two seconds (did not go to this by the way), pole dancers dancing in a bar full of fake tigers? you name it, you can do/see it.

TOP TIP: The locals all have their own way of letting people know how much you barter. They will give you different coloured bags for how cheap you are, so bring your own bag and put your items inside so they don’t know haha. We did not find this out until months after leaving Thailand.

Food wise.. Do not eat meat or egg if you’re eating from the restaurants which have pictures out the front. Everywhere wants to show you how good their food is but really, we got food poisoning about 3 days in to our trip from a chicken pad Thai… If you trust the restaurant and its at some nice hotel then by all means go for it. Also the street food is supposed to be amazing but like I said, judge it because a lot of time they have flies hovering around the food. Anyway I basically lived off Oreos and water after our food poisoning. 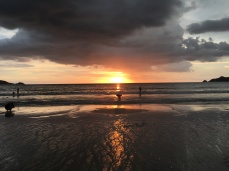 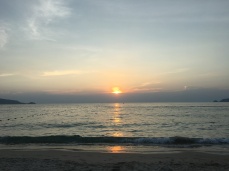 We spent a lot of time down at the beach, the sunsets were unforgettable and the beach was so chilled. We also rented jet skis out which is something you NEED to do. So much fun!

We took a 12 hour overnight bus from Phuket to Bangkok, it was probably the worst night sleep I have ever had, if I got any at all but it was super cheap and you gotta do what you gotta do right? (Also we still had food poisoning at this point… we didn’t have a choice but to get on the bus as we had already paid 4 extra nights in Patong to try and fix ourselves). 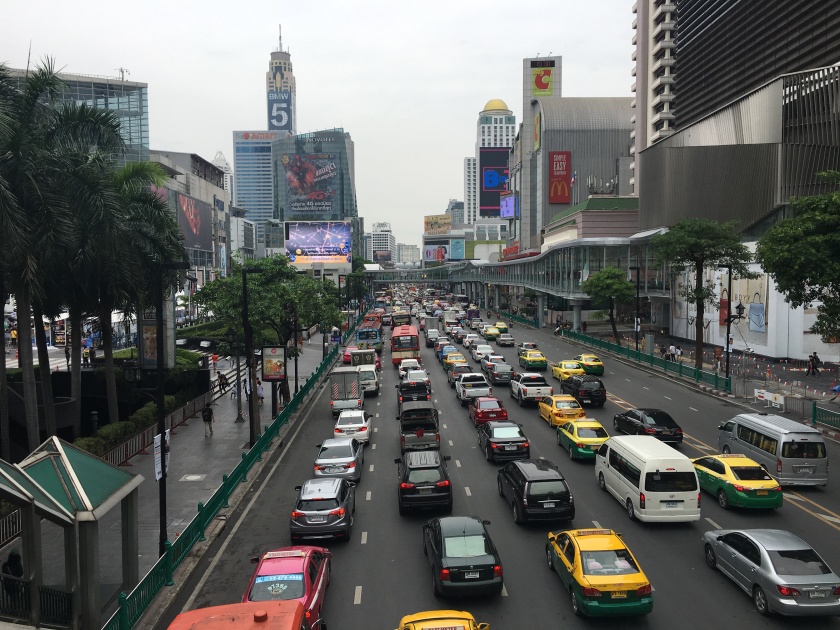 If you think you’ve been to a busy city, just wait until you’ve been to Bangkok. This is the most hectic city I have ever been to, I can’t even describe how crazy it is you just need to go and see it for yourself. We had mixed reviews about where to stay and what hotels to book when coming here. We booked a hotel which was really nice but a little bit like a prison, well thats how I felt anyway. As crazy and great as Bangkok is, theres a side to it you don’t want to be on. Do not walk around alone at night time, especially down back streets, I can not express this enough. 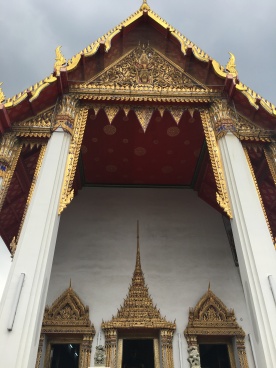 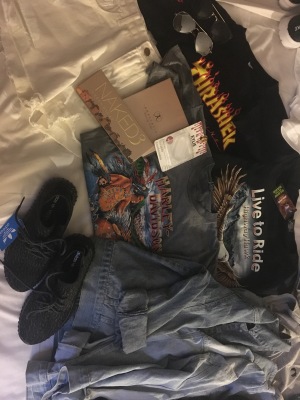 First thing on my mind right now were the markets, the Markets are bloody amazing, we spent hours and hours walking around them. Our favourites were the Weekend Markets, please allow yourself literally 5 hours to explore the whole place haha. We took a taxi out to the water markets too (markets on boats floating in the rivers) and sadly it was closed that day, It didn’t say this online so maybe ask the locals and see if they have any answers. They do whack stuff too like charcoal ice-cream.. PSA: do not have this the night before your flight, charcoal detoxes the body! I was on the toilet all the way until boarding the plane! (delicious though) 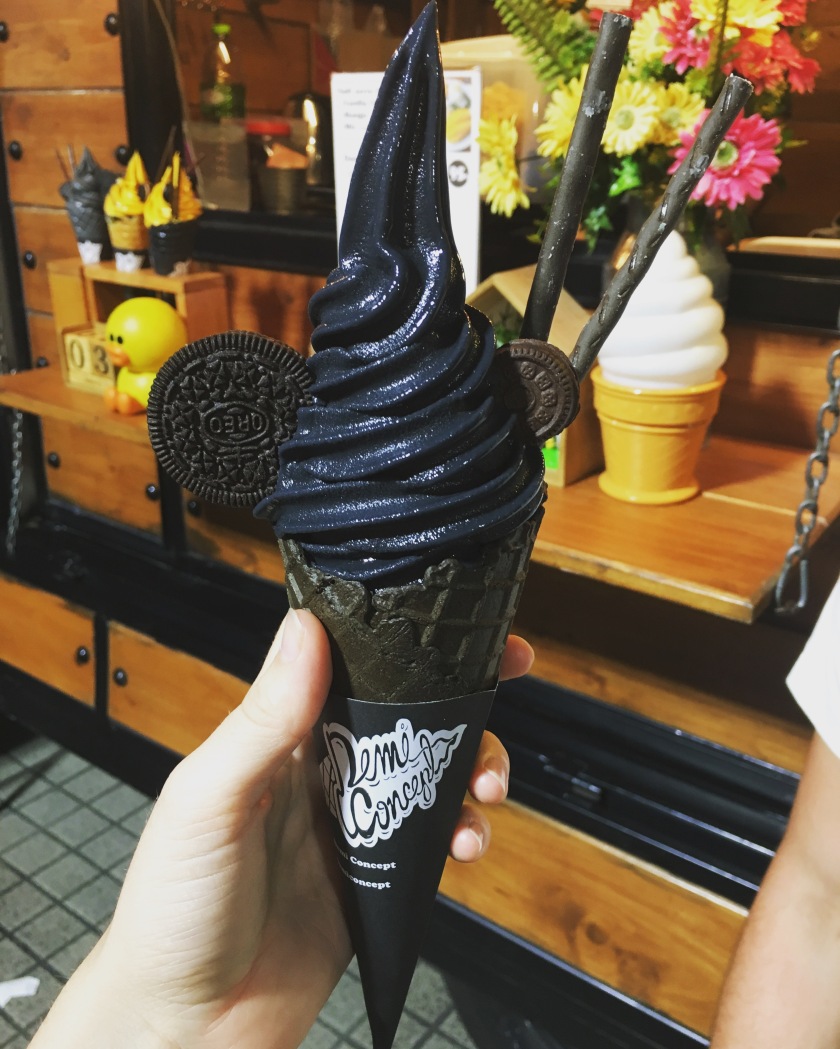 TOP TIP: when getting in a taxi do not agree on a price, ask for the meter, a lot will drive away but I assure you this will save you soooo much money! A little tip our hotel guide told us, also if your hotel is booking you a taxi they usually always book them on the meter but just make sure. Tuk-tuks are good fun but you have to agree on a price, we still did a few just for the experience.

We took a trip to see some more temples, including the lying down Buddha, everything is so stunning, you can’t wear your shoes into the temples and ladies have to have their knees covered, this goes for most temples. Also quick note, the malls are insane here, they’re more luxurious than the west fields in London. If you still had food poisoning like us and didn’t really trust anywhere, go to the mall food courts, its actually delicious food and its food you can trust. 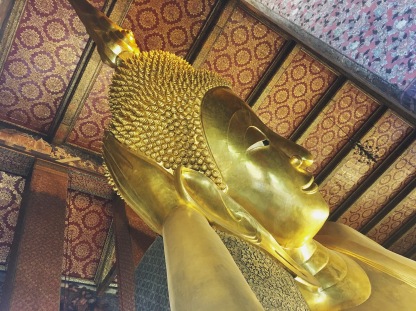 When we are in any city we always have to try and get to the highest point, so us being us, we went to the Baiyoke Tower which is the tallest roof top building in Bangkok. We paid our £15 and got into the lift which also went toward a cocktail (yess!). The views from the observation deck were incredible, I highly recommend anyone going to Bangkok to do this, the observation deck also spins around. After you’ve done that you go a couple levels down to the bar, where you get your cocktail and enjoy the views again. This is probably the highest building I have ever been in and if you still didn’t believe me that its the most hectic city ever, here is photo evidence haha!